Tuesday, November 13, 2018-The International Energy Agency (IEA) today warned that global oil shortage in the 2020’s decade is a very high probability and now is the time for producers to invest.

IEA forecast calls for an increase in daily global demand by 7.5 million barrels per day between 2017 and 2025.

IEA stated ” without any future capital investment into existing fields or new fields, current sources of supply (including conventional crude oil, natural gas liquids, tight oil, extra-heavy oil and bitumen, processing gains etc.) would drop by over 45 mb/d over this period.” In other words, existing fields will witness a  “natural decline” in supply as this supply decline would create a shortage at current demand levels.

Added to this scenario, the dramatic shift in increasing demand by developing economies,( 80% of the global economies are developing), and the shortfall in supply would be even greater. IEA further states ” doubling of current capital investment in new fields is now required to cure this forecast in global oil shortage.”

Regions at greatest risk of shortage would be the Asia-Pacific region with supply shortages already beginning to surface. See Chart below. 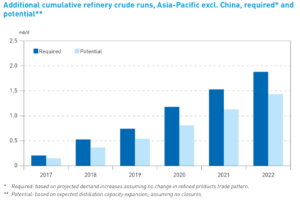 The United States is the world’s leading oil and natural gas producer followed by Saudi Arabia and Russia. The United Sates has averaged 10.7 million barrels of oil per day in 2018 with peak production at 11.8 mb/d. Failure to meet this global natural decline shortfall would mean that some of the supply-demand “gap” would remain and another source would need to step into the breach.

The most likely candidate to do so would likely be for US operators to increase tight liquids production at a much faster rate than is projected. In this case, US tight liquids production would need to grow by an additional 6 mb/d between now and 2025. Total growth in US tight liquids between 2018 and 2025 would therefore be around 11 mb/d: roughly equivalent to adding another “Russia” to the global oil balance over the next 7 years. Sounds impossible and why IEA is warning producers and their partners that NOW is the time to invest.